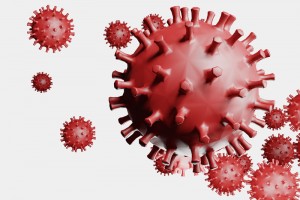 Taiwan was predicted to bear the second highest risk of imported COVID-19 cases from China in a Johns Hopkins analysis published in late January, based on its geographic proximity and high volume of interactions with China. However, it turned out to have one among the lowest infection rate of COVID-19 in the world. By April 29, there are a total of 429 cases (343 imported), and 6 died. The infection rate and mortality rate are 18 and 0.3 per million populations, respectively, both among the lowest in the world.

Taiwan has earned its hard lessons from the 2003 SARS outbreak. Suffering from inadequate information and delayed border control, Taiwan was seriously hit with 346 cases and 37 deaths. Several hospitals have been completely or partially shut down due to nosocomial infection. To facilitate inter-department coordination and collaboration, the Executive Yuan organized a Central Epidemic Command Center (CECC). The current Vice President was the first designated commander at that time. Afterwards, Taiwan allocated extra funding to strengthen the staffing, training, research and surveillance system of its Centers for Disease Control (CDC), and to support hospitals with high-quality infection control program and staffing. The Infectious Disease Control Act offers government jurisdiction and responsibility to impose all necessary restrictions and regulations to prevent and contain the spread. The standard operation procedures for isolation and quarantine of individuals have also been established during SARS outbreak.

Carrying such lessons for 17 years, Taiwan initiated its interventions on border quarantine and preparation of laboratory capacity immediately after knowing China’s report of COVID-19 to WHO. The national preparedness and response plan was issued on January 13. Based on this plan, the CECC was soon kicked off to facilitate inter-department collaboration after having the first imported cases.

The primary goal of Taiwan’s efforts is to prevent and control all potential sources of spread as early and comprehensive as possible. Such efforts draw on several levels of blockage, including blockage at the border, the healthcare settings, the community, and the individuals.

Blockage at the border is of the highest priority and was implemented by banning flights or recently, entrance of foreign passengers, from high-alert regions, checking all in-bound passengers on history and symptoms of infection, and placing all healthy passengers from high-alert regions (initially only China, now all countries) under 14 days of quarantine. By March 6, there were only 18 imported cases, mainly from China, and from March 7 to April 13, 320 imported cases, mainly from Europe and US.

The second level is blockage at healthcare settings by effectively detecting and isolating cases and preventing nosocomial infection. All testing and treatment are covered by the National Health Insurance. Big data from the National Immigration Agency was linked to the National Health Insurance information system. A TOCC (travel, occupation, contact, cluster) checklist were used to facilitate risk classification and prompt virology testing. In addition, physicians may prescribe the test to any suspicious patient when clinically judged appropriate. All identified cases are isolated and treated.

The public health system investigates all cases and traces their footprints to identify sources of infection and possibility of spread. Persons having direct close contact with cases are home quarantined. Mobile phone signals are used to trace the compliance with quarantine. Community workers make outreach calls to check health conditions, provide support, and instruct how to seek medical services when symptoms develop.

To protect staff and patients, hospitals implemented strict entrance control. Everyone (including the staff) must undergo body temperature check, disinfect hands, wear a mask and register with the health insurance IC card to check travel history. The traffic control bundle was designed to separate persons with different levels of risk from getting into contact. The infection clinic was placed in a tent outside of the hospital building. Staff undertaking high-risk procedures are equipped with adequate personal protections. All staff are under strict health surveillance on symptoms and travel history. Teams are sub-divided to avoid risk of total paralysis of function if anyone gets infected.

The third level of blockage is preventing potential spread at the community level. Schools implemented entrance control, health surveillance and universal precautions. Criteria to shut down the class or the whole school were established. The environments were disinfected regularly. With such vigilant approach, Taiwan managed to keep school activities going on with only few classes or schools being closed temporarily. Restaurants, shops and workplaces are encouraged to implement similar risk management system as well. Recently, after the number of imported cases reached 300, the government has raised the level of community control to mandate entrance control for public transportations, social distancing and limitation on the volume of accommodation in public places.

The last but not the least is the blockage at the individual level. During the SARS outbreak, the Taipei City Government has advised citizens and high-risk workers (such as bus drivers) to wear a mask for mutual protection. This year, people started to wear masks again for self-protection since late January though the government told people no need to do so at that time. The shortage of masks emerged, and the government rapidly established a centralized control system to produce and distribute medical masks. People listen to the daily COVID-19 briefing, share information and knowledge through social media, wear masks when going to public places, wash hands frequently and keep away from overcrowded places. These have become a new lifestyle in Taiwan. Such grass-root collective practice of high alertness, outbreak literacy and community engagement has built a strong “societal defense mechanism” and was viewed by local people as the key partner to fight together with the government against community spread of COVID-19. So far, though some cases without travel or contact history were missed for quite a few days, none has led to significant spread.

In summary, the multi-level blockage strategy can be applied to communities of various sizes. By blocking or reducing the importation/exportation of potential cases, communities with lower level of infection can be better preserved and a lot of deaths can be prevented. For communities with moderate level of community spread, expanded offering of virology testing can facilitate detection and isolation of mild or asymptomatic cases. Limited amount of undetected cases might be blocked by the practice of whole-of-society universal precautions and social distancing. It takes the collaborative efforts between different departments of the government, the health system, and the whole society to minimize the health impact of the outbreak and to restore some social activities before more efficient control measures (such as new vaccine) arrive.

Local protocol implementation for adherence to international guidelines on antibiotic prophylaxis: a simple tool for improving antibiotic stewardship in the Hospital of Trento (Italy)